In 2018 I recall being very interested in the Sur Ron X that appeared on the Sur Ron China site. Two of the new improvements which were of particular interest to me; the X Controller with a Sine wave, regenerative braking and an improved seat. There were other new improvements which were of little interest to me. Subsequent to the announcement I happened to be one of the lucky 50 in the USA who obtained the X Controller and in my view it is all that it was touted to be.

I never heard anything more about the new and improved seat. So many of the people I converse with through a group complained about the OEM seat; too hard, too narrow, hurts the ass much more quickly than the battery runs dry. And to each of those complaints I wholeheartedly (or assly) agree. So I decided to purchase one of the $35.00 OEM seats Luna had listed on their site. My plan was to use the extra seat as a form for Corbin in Hollister, CA. I’ve used Corbin in the past for motorcycle seats and they are true craftsmen. So my thought was to take the seat down there and have them make a custom seat. I know it would not be inexpensive, but for me it would be worth the price.

When I got the OEM seat from Luna I wasn’t sure if it was wishful thinking and seeing, but it appeared that the new seat was thicker and of a slightly different shape than the one which came on my Sur Ron. “Naw Mark, you’re just wishful thinking……” or was I?

So I decided to measure the seat, the width, the thickness and the shape. And guess what!!??? It is thicker and of a different shape. So I can only surmise that the new OEM seat being sold by Luna is the NEW X SEAT that comes on that model! YIPPEEE! 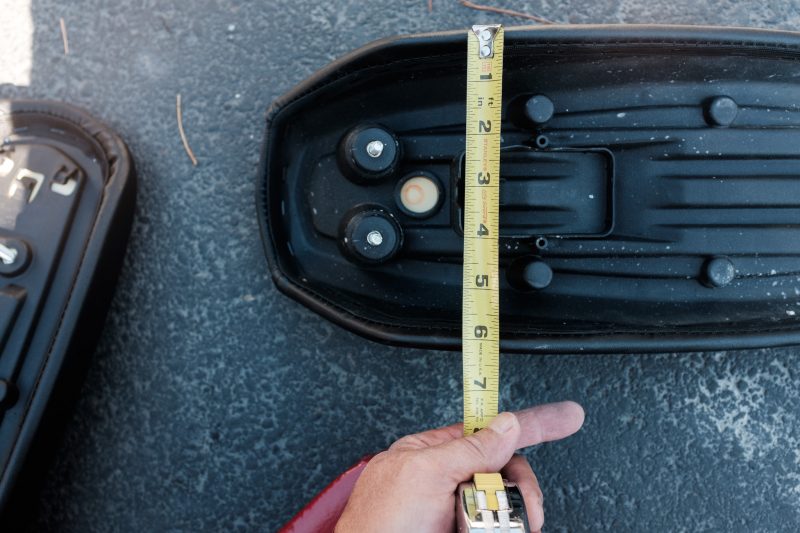 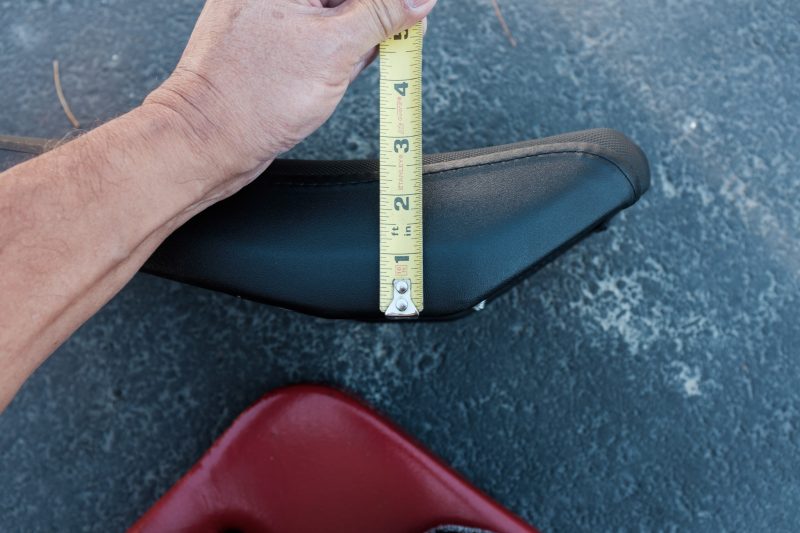 The real test though was my seat of the pants test. By no means is this scientific, but according to my ass the seat is a HUGE IMPROVEMENT. I rode my normal route which is about 13 miles. Normally when I get home my ass is sore, specifically the part that is three inches on each side of my crack. It aches and if I continue to ride it becomes painful after about 10 more miles. So in those instances I take a break and get off the bike. With the new seat my anal cleft and surrounding fleshy parts didn’t hurt AT ALL after the 13 mile ride.

This is the best 35 bucks I’ve spent on my Sur Ron. My ass thanks me and a happy ass means riding longer!

Why a new seat? Well the longer I’ve owned this bike my trips become longer each time. Heck I even pack a meal because I know I’ll be out in remote areas. And for anyone who owns one of these bikes who rides more than 15 minutes at a time, the seat is a torture rack. Don’t think I’m sitting on my bony ass the whole time. When off road I’d estimate I sit about 40% and stand about 60%. On the street or bike paths I sit 90% of the time. After about 35 minutes on the stock seat my ass HURTS, not my butt cheeks, but the middle portion. The stock seat is only 5.5” wide and the foam contained in it is stiff. I had purchased an X seat from Luna which was ‘better’ meaning I could last about 50 minutes before I wanted to cut my ass off!

So I tried biking shorts….nope not much improvement. Then I bought two different Air Hawk pads. They were good, but I didn’t like how they looked and felt. Tried a gel/foam seat pad, nope that one didn’t help the middle of my butt.

Finally I tried a Mad Dog seat pad. I reinforced the sides of the pad by placing pipe insulation tubing under where my butt cheeks rest. This lifted the middle of my ass off of the seat and it was way more comfortable. Also by folding the front of the pad under, it removed the slope of the stock seat which prevented me from sliding forward during hard braking.